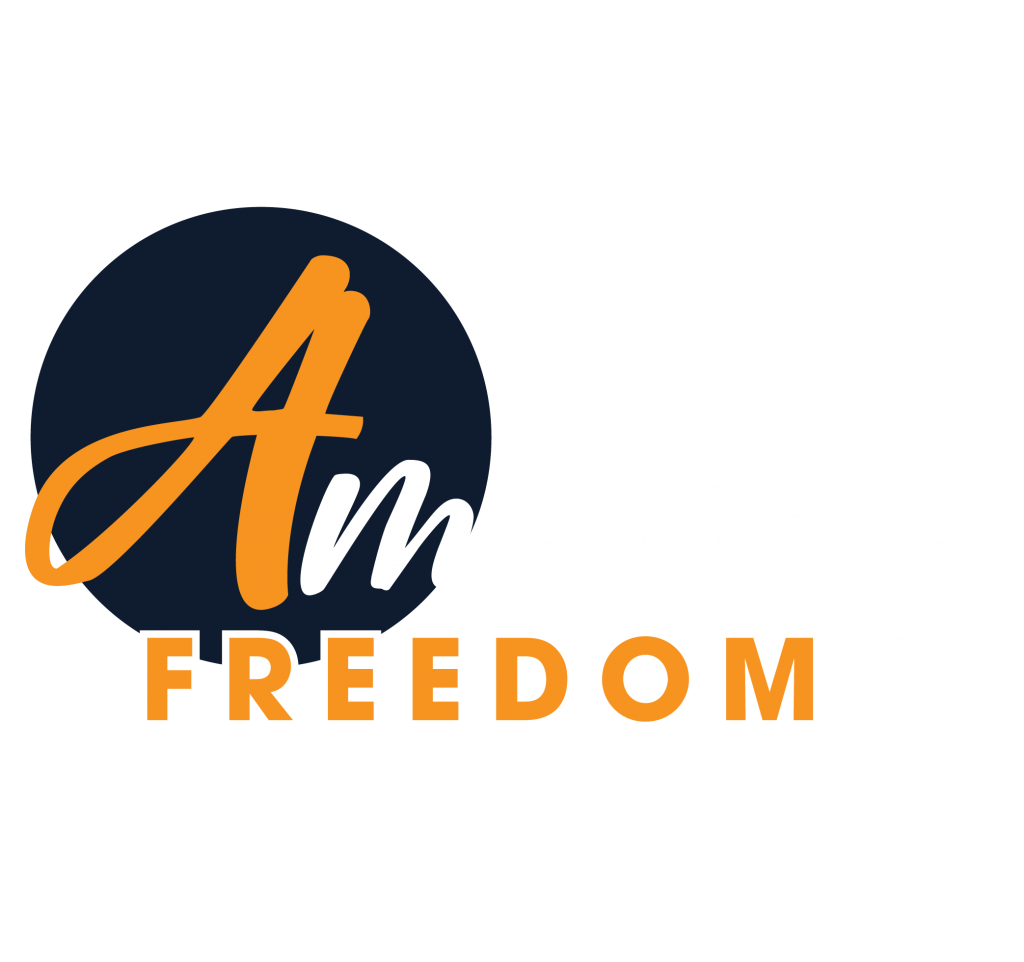 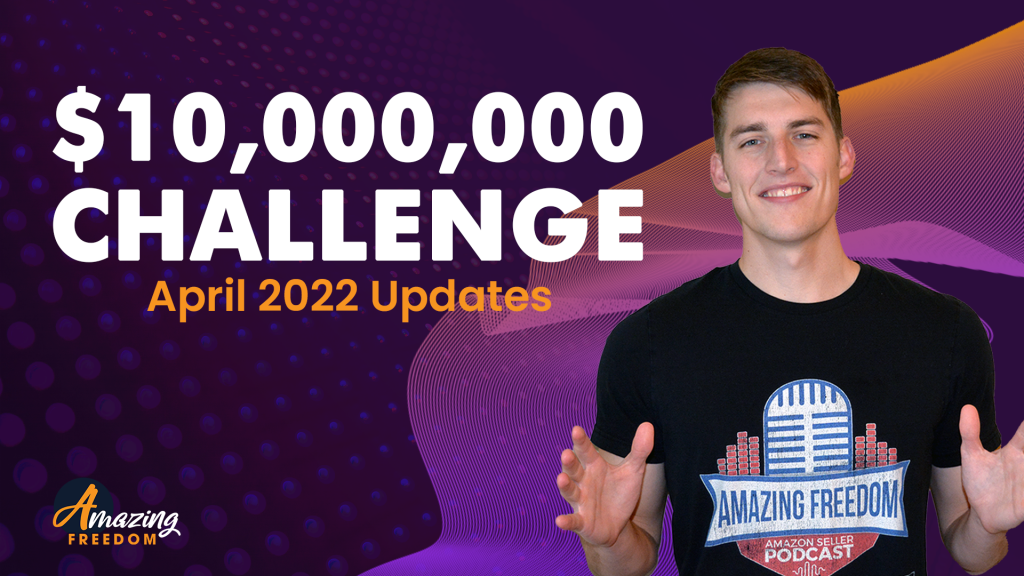 Goals: For the Year and for the Month

We are officially done with the 4th month of the year and the first month of Q2. This year we are giving our all to hit our $10,000,000 challenge on Amazon! One of our big goals is to release a brand new $1,000,000 product line to help not only with our sales goals but also to help develop our brand. This year, we are focusing on growing the brand and expanding our product lines. This will complement our existing products and further anchor the brand as a main player in our niche.

So, keep reading as we have some very insightful information for both experienced and new sellers on Amazon. See how we build 8-figure habits and grow out of our old 7-figure habits.

A quick review of last month’s numbers – we only got to 87.7% of our $1M goal for March. A 26% ACoS and 17% TACoS for the entire month. Although our sales were still pretty good, our ad performance was not. We had gone overboard with our ad aggression to try to capture more sales and ended up thinning out our profits. This month’s update will mainly discuss our attempt for profit recovery and better ad performance.

*SPOILER ALERT*  We recovered well! Scroll down a bit to find out how we did it. 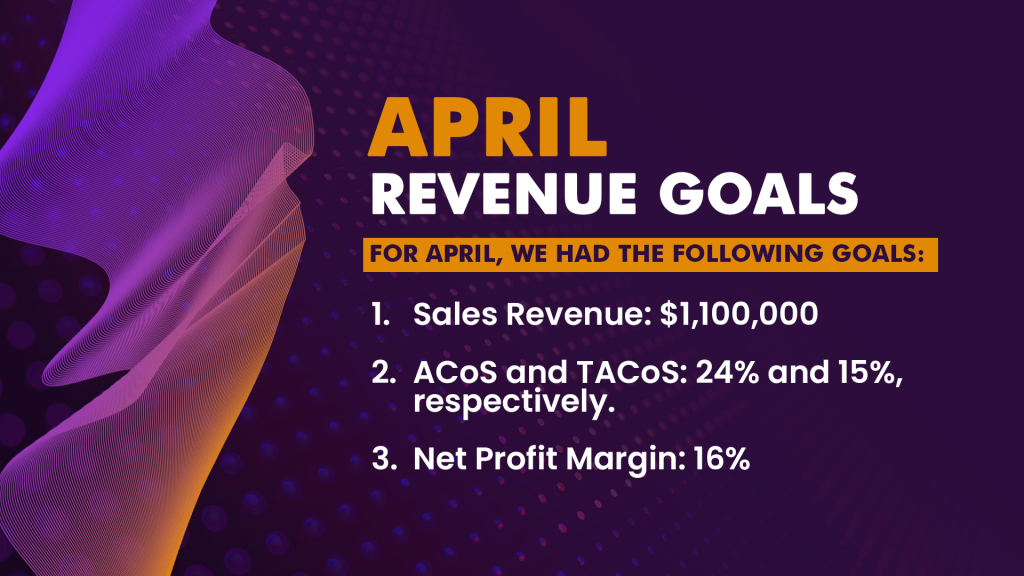 For April, we had the following goals:

April is the start of some strong seasonal sales for us, so we had forecasted sales pretty aggressively. We finished off March with total Amazon revenue of only $870k, but we were still pretty confident we could increase over our original March goal. We ended up settling on a sales goal of $1,100,000. For our PPC Goals, we really wanted to recover from the poor performance last month and balance that with this higher sales goal. We ended up with a goal of 24% and 15% for ACoS and TACoS, respectively.

This month we were mainly looking at two things:
1) One, we wanted to kick off our peak season with killer sales in the first month of Q2
2) and two, to recover some of the profit we lost the past month by lowering our overall TACoS.

April 2022 Sales:
Let’s look at the revenue first. Fortunately, we were able to get to $1.1M and more.  It was a pretty interesting month, we started the first two weeks with super strong sales, exceeding the required sales velocity, then by the third week we started to see a drop in sales and we thought we wouldn’t make it. But come the fourth week, sales started to increase sharply again. You can actually see this in the graph below. The blue line represents the daily sales goal, the orange line shows the actual daily sales. 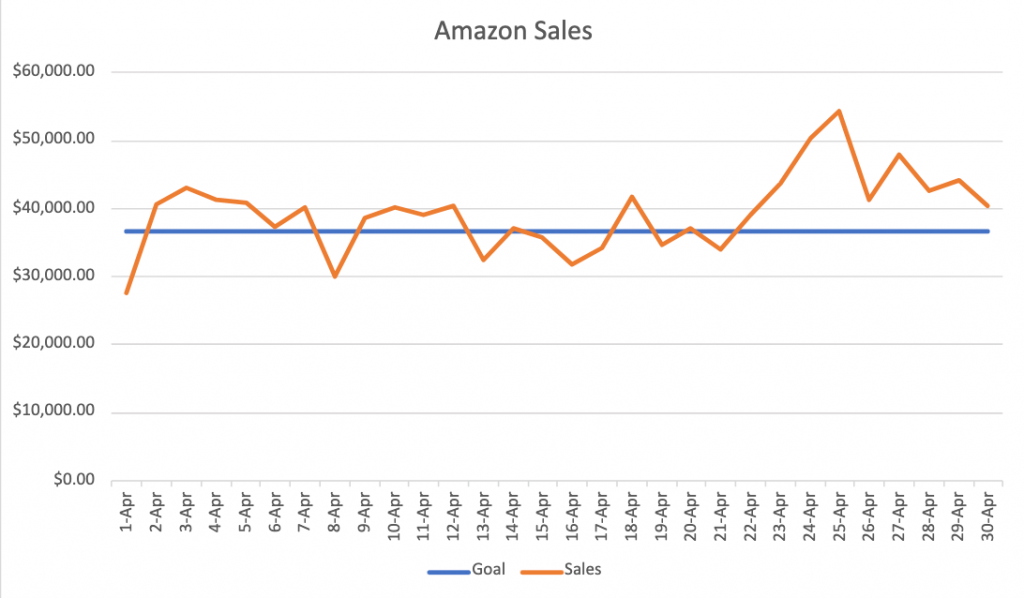 For PPC, we started the month in recovery mode because we had to make up for the high spend month we had in March that caused our ACoS and TACoS to shoot up. Luckily, a lot of our strategies to reduce advertising spend while maximizing sales seemed to work. To recap some of the important things we tried last month:

With all of these tactics that we adopted up until April, we were able to recover quite well from March, with a 3% decrease in ACoS and a 2% decrease in TACos, which was quite significant. That being said, we really wanted to get down to a 15% TACoS, but we only ended at a 15.92%. Fortunately, our profit margins also improved a lot from 10% to 15%, still not on par with the 16% target but a definite win nonetheless.

April was a really strong month for us in terms of both sales and profit. April was a promising indicator of how strong the following months could be.

I have to preface this part by saying that a large part of this month’s success is from the growing demand for our products since more demand means more organic searches and better TACoS and profitability. However, that isn’t to say that the strategies we implemented here aren’t effective because they are! This month, we focused aggressively on our ad placement and showing in the right places. The goal is to be able to be as efficient as possible with PPC spend and mainly correcting any lapses in judgement we had in the previous month.

Besides the strategies we adopted from late March, we had a few things we started to employ in our PPC development which are also our Key Seller Tips:

In theory, niching down should improve both conversions and keyword ACoS as these are designed to directly appeal to customers looking for a product through a highly specific keyword. Here’s an example from our experiment in April:

In the table above, I’ve summarized some examples here. I’ve only included keywords on the niched campaigns that have converted at least twice as they are only about 3 weeks old in comparison to the other old campaign that has been running for months. For context, the old campaign column includes brand ads (for KW 1 and 2) and a video ad (KW 3) using generic creatives and copies while the niched campaign corresponds to a campaign where those  specific keywords were transferred to where the creatives were meant to highlight that specific keyword. As you can see, across all examples, the niched campaign seemed to work better in fact, the first keyword actually didn’t convert prior to being transferred to a niched campaign. This really just showcases how important creatives are.

I’ve actually been running niche SBA campaigns since 2018 when we brought the first product of this brand in. Back then I would be super aggressive for our main keywords with very specific SBA language. But over time we kind of got lazy as we added a bunch of new skus, so I am glad we are getting back into it.

So, what I did in April was I observed our competitor for this specific ad spot that we were bidding super high on. At this point, we were bidding close to $12 per click and they were still getting that ad spot at times. Then, I realized that this specific competitor was priced lower than us and is most likely bidding way higher than us, which means that they could have been operating at a very thin margin trying to steal that ad spot. Plus, one of my biggest observations is that their BSR never even came close to ours. So, we decided to give up that ad spot for that specific keyword, or at least not bid as aggressively. Immediately, we started seeing better ACoS, although at a lower order number, but we were getting better profit margins. Really, the end goal is to be efficient and know that some ad spots are worth losing. That being said, sometimes you have to be defensive and beat out new competitors to the market before they can establish themselves. Amazon is always a battleground for real estate.

In our last update, we discussed how a lot of our current products were released mid to late last year, so we didn’t have ample data to forecast for early this year. Due to this, we had a lot of overforecasting and underforecasting with the latter being more of an issue since we were losing potential sales. I often call that a ‘good problem’. But it’s still a problem.

Towards the end of March, we had adjusted our forecasts for April based on what we had seen in March. But it was too late to prevent some of our products from going out of stock for a few weeks. This time around, we realized it was better to overforecast the start of the season as we could just sell through the units in the following months. However, with a lot of global shipping issues – some countries being on lockdown again, increased fuel price, etc., our manufacturers just couldn’t get the necessary raw materials in on time. However, we clearly were at fault for underforecasting some products as well, which caused us to put out rush orders. This in turn resulted in production rescheduling and shuffling resulting in more delays in production for other products. We just made sure that we were prioritizing our top products that make up the bulk of revenue and profits.

So, the lesson here is to constantly be forecasting inventory ahead, and to boost buffer stock at the start of a busy season.

2. Returning to the Basics

In this month’s attempt to recover from the messes of March (sounds a bit harsh but I just mean the areas that we really faltered on), we also went back and tried to pinpoint other less obvious areas of improvements. One thing we realized is that a lot of our keywords appeared in different campaigns with the same objective. Basically, there were a lot of keyword redundancies.

Over time, some of our campaigns had gotten a little messy as we had some of the same keywords showing in multiple campaigns (especially for products 2+ years old). So, we re-designed our campaigns to remove any keyword redundancies. Basically, it was a mess not knowing where to find specific targets, which was further aggravated by the fact that we have over 80 portfolios with at least 5-10 campaigns in each one.

To recover from this, we had to go back to our SOPs and track all of the keywords and which campaigns they repeated. From there, we decided to merge the campaigns, if the goal of the campaigns were the same. Essentially, cleaning up any redundancies and allowing us to be efficient with optimization. 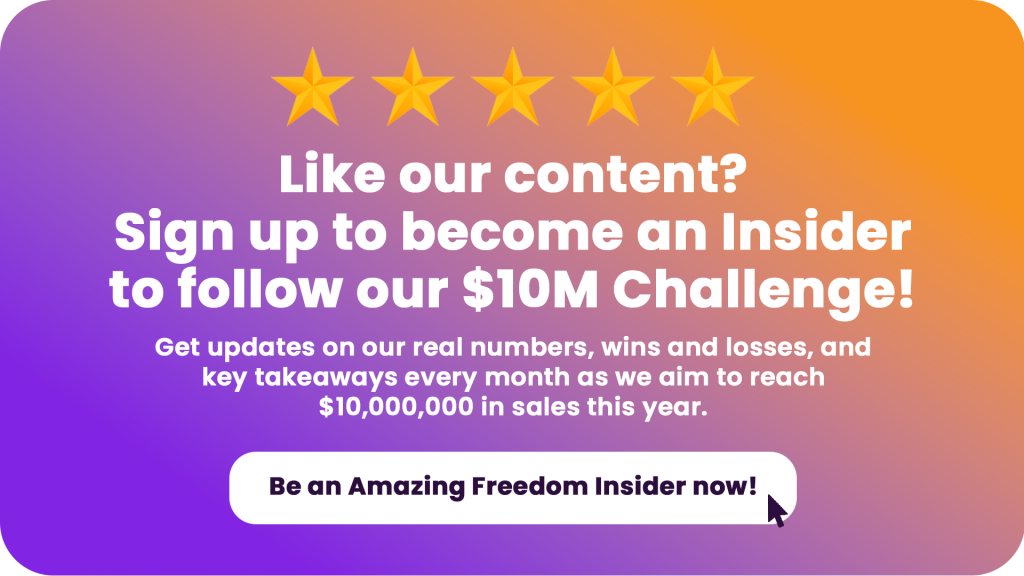 For April, we actually released a new product in this product line and has had some solid sales since its launch but before that let’s go ahead and look at the performance of the first product in this line.

Due to some limitations with Amazon’s PPC manager, specifically date range, I am only able to show the lifetime view which includes the data up until now, as I write this, on May 16. For the purpose of this update, I will include that data as well.

At this point, this product is doing extremely well for us. In April we didn’t have to spend as much as in March but still got higher overall sales – a great indicator of increasing organic ranking and brand recognition.

This new product has been running for a little over a month as I am writing this. Even in that short time period we have already seen a large number of orders and multiple reviews come through. This still isn’t as strong as the first product since the ACoS and TACoS are pretty close together.

Overall, this product line is still far from where we want it to be. But we are still in the early stages and I am confident it will eventually turn into a $1MM product line.

While the goal for April was PPC and profit recovery, we were also able to exceed revenue goals which is a testament of our drive to constantly improve systems. Right now, we’re only seeing good things ahead of us as we head into May.  You have no idea how excited I am while writing this as we have already started the month of May incredibly strong, with no signs of slowing down! We have some new tactics up our sleeves that we’re testing out and we can’t wait to show it to you guys in the next update. 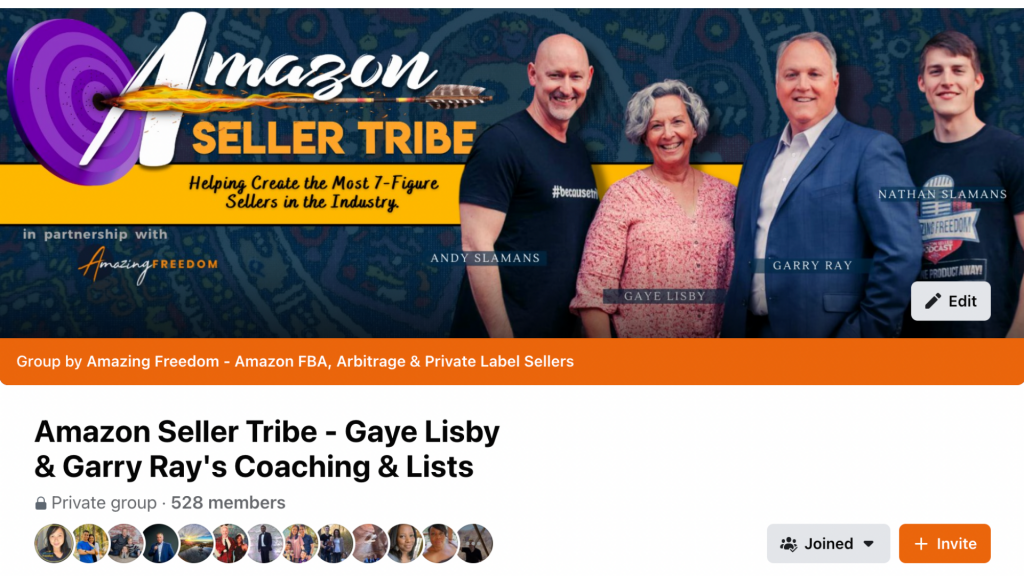 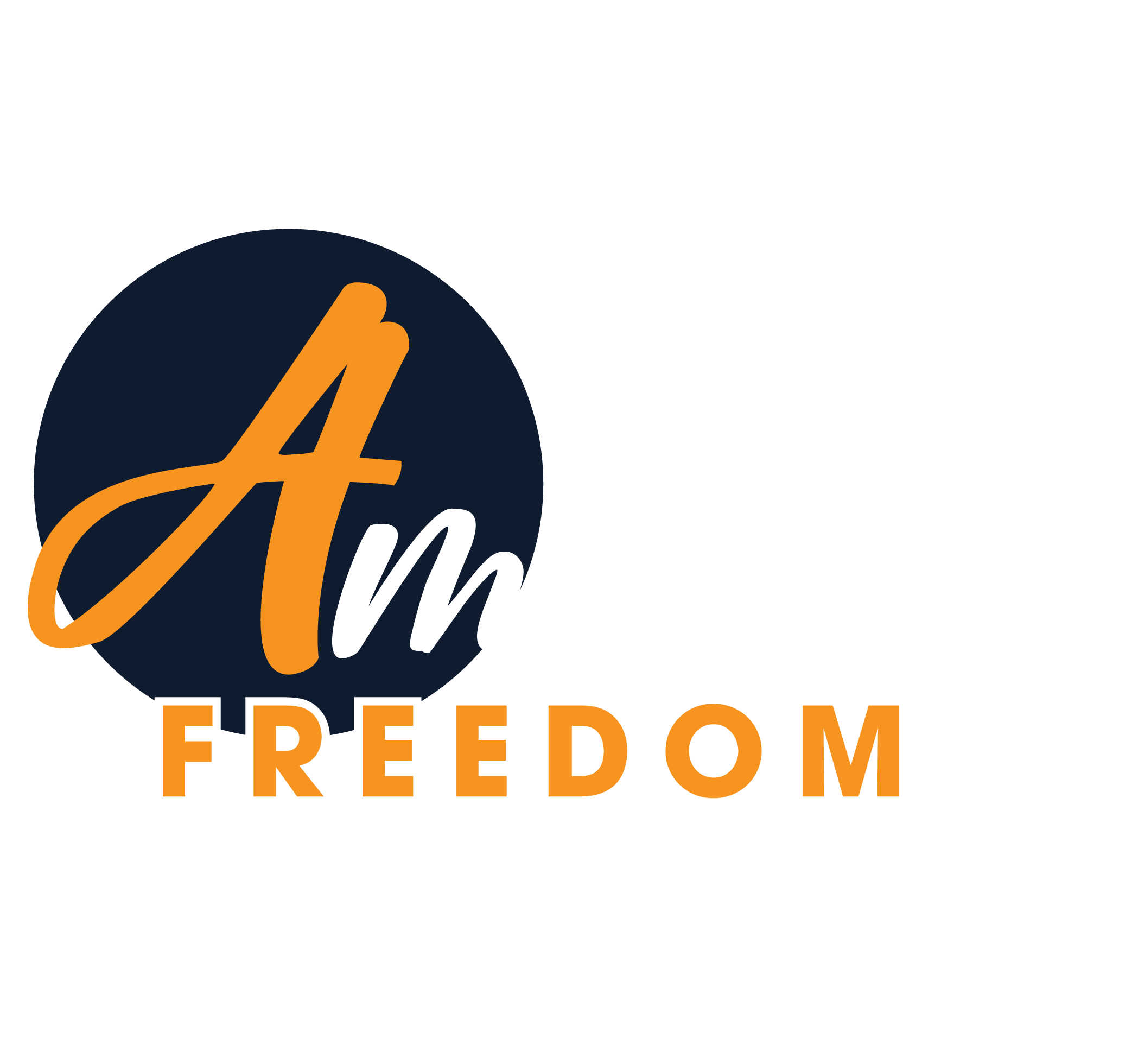 sent directly to your inbox with Amazing Freedom Insider